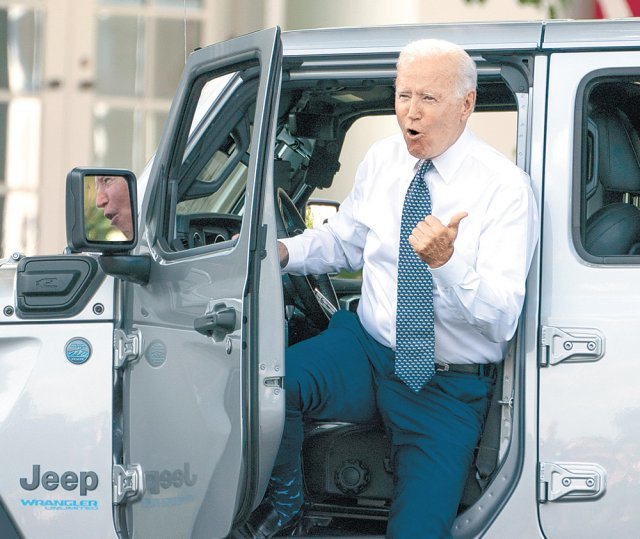 U.S. President Joe Biden has announced an aggressive goal of making half of new cars sold in the U.S. into eco-friendly vehicles, such as electric vehicles, by 2030. Following the European Union (EU), as the United States has set a target for transitioning to eco-friendly vehicles that exceeds expectations, it is pointed out that the domestic automobile industry must also respond quickly.

On the 5th (local time), President Biden signed an executive order supporting eco-friendly vehicles such as electric vehicles, plug-in hybrids (PHEVs) and fuel cells to reach 40-50% of new car sales by 2030. “The future of the automotive industry is electric vehicles,” Biden said. There is no going back,” he said.

Although the executive order is not legally binding, the representatives of the “big three” automakers in the United States, including General Motors (GM), Ford, and Chrysler’s parent company Stellantis, attended the event and made a joint statement that they would participate. South Korea’s Hyundai Motor Company and Japan’s Toyota Motor Company also expressed their support for it.

According to the New York Times, the proportion of eco-friendly car sales by major US automakers this year is only 2%. Since the market has predicted that the proportion of electric vehicle sales in the United States in 2030 will be 20-30%, it is evaluated that the US government’s announcement exceeds expectations.

Overseas automakers are also accelerating their movements. In addition to the US Big 3, Germany’s Mercedes-Benz has announced plans to achieve 100% of electric vehicles by 2030, and Volkswagen’s plans to achieve 50%. Accordingly, the recent growth of the electric vehicle market has exceeded the predictions of experts. According to EV Sales, a market research firm, the proportion of global EV sales is expected to increase from 4.1% last year to 14.1% in 2025. If it is limited to the US, Europe, China, and Korea that have electric vehicle charging infrastructure, it is estimated that this ratio will be higher.

In Korea, Hyundai Motor Company has set a goal of selling 560,000 electric vehicles by 2025, and in the mid-to-long term, plans to fill the entire product lineup with electric vehicles in key markets such as Europe, the United States, and China to achieve a market share of 8-10% by 2040. is standing up

In addition, the three ‘K Battery’ companies are also spurring market expansion by establishing joint ventures (JVs) with US automakers or preparing plans to expand their own production plants. LG Energy Solution has partnered with General Motors (GM), SK Innovation has partnered with Ford, and Samsung SDI is also in talks with Stellantis to establish a joint venture. Korean battery makers have also signed battery supply contracts with other US electric vehicle manufacturers such as Rivian and Lucid Motors.

However, there are also voices of concern that the response of the entire domestic automobile industry is delayed except for Hyundai Motor and the battery industry. Ssangyong Motor plans to introduce its first electric vehicle, the Korando Emotion, to Europe in October this year, but the plan may change depending on the progress of the sale following the corporate rehabilitation process. For GM Korea and Renault Samsung, it is difficult to establish a market response strategy as it is unclear whether the headquarters will allocate electric vehicles to domestic production lines. According to the Ministry of Trade, Industry and Energy, 80% of domestic auto parts makers were not prepared for the transition to electric vehicles.