Planets That Affect Your Life More. Know Their Solutions! 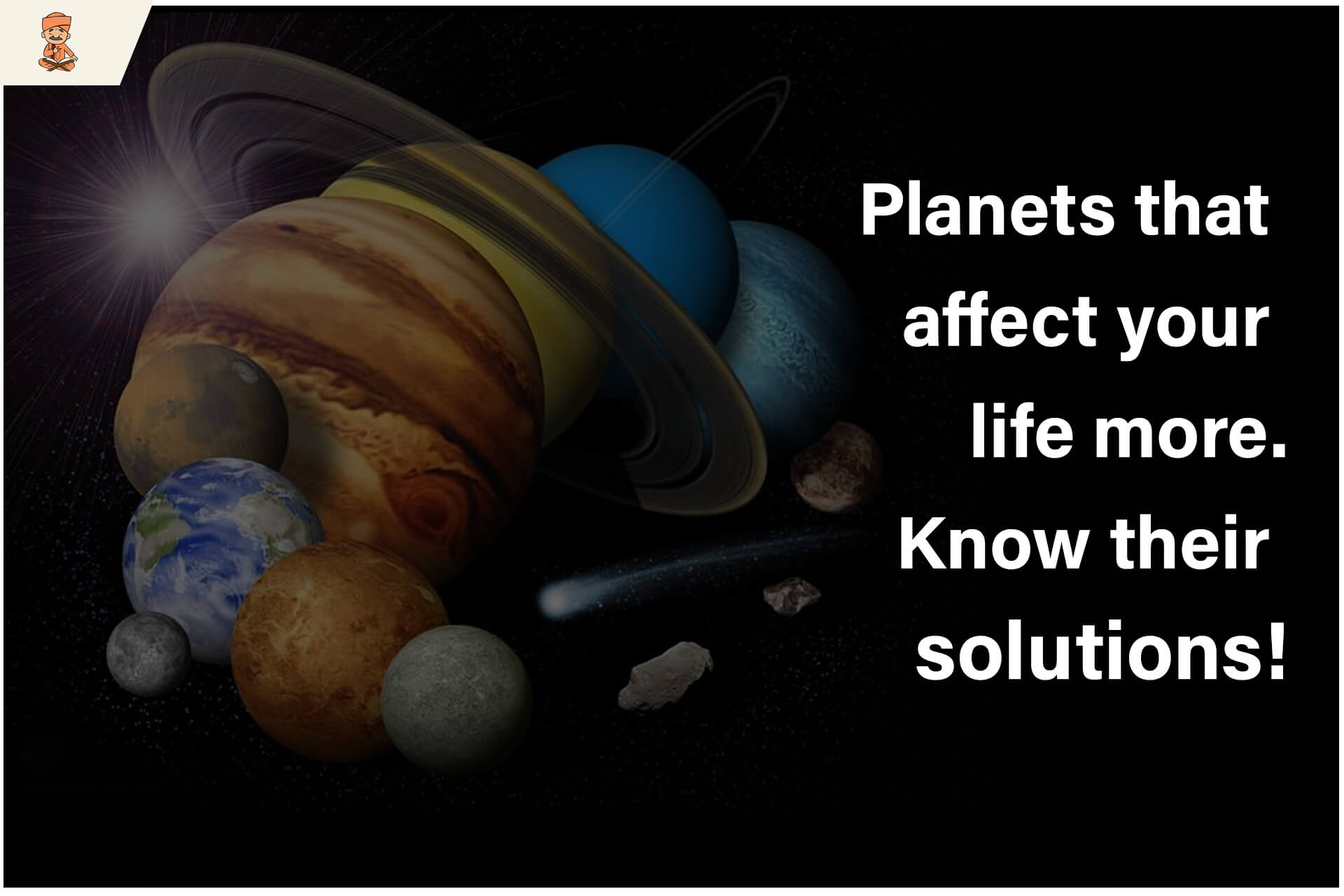 Planets That Affect Your Life More. Know Their Solutions!

If you are into Zodiac signs and astrology you know how much importance our twelve houses hold in our life. Not just sun signs, but also the position of the planets and stars in our birth chart and its houses are important. Not only once or twice but every year, every day the position changes and it also affects our life one way or the other.

These planets are also called vedic planets, according to our Veda Shastra. There are nine Vedic planets or planets which are auspicious to us namely:

Apart from these Planets we also 27 or 28 daily stars which are also called vedic stars. Your horoscope based on your sun sign is not the only thing that affects your life. Astrology I vast and so huge that there is always something to consider before you map out the effects on your daily life and the people connected to you.

Planets’ effect and their combinations with twelve houses of astrology

The first house is important in the birth chart named Ascendant or Lagna. This is considered the House of the body, beginning of life, looks, body, individuality, and much more. Sun is the ruler of this house and holds prominence over it. Sun is also considered a father figure, and ruler of the celestial bodies. This house refers to the first Zodiac Sign Mesha Rashi or Ares as described in SUVICH : The real astrologyin detail. The Sun also represents the soul and provides energy.

While Sun is considered the father figure among planets in vedic astrology, Moon is considered the Mother figure. The moon affects our mind, calmness, etc. It is also considered to have a heavy effect on our water, ocean, seas, reservoirs, rivers, etc. This is not only astrologically believed but also scientifically proven s we have seen the moon affecting tides all around the world. Moon is the exact opposite on the birth chart of a person as the Sun fuels and increases the energy on Moon.

In our Vedic astrology, Mercury is considered the symbol of Intellectuality. Mercury holds a lot of solid aspects related to different facets of life. It affects a person’s logical capability and his ability to make difficult calculations in his head, assessing a situation faster than others. Strong mercury also means excellence in mathematics. It also enhances the ability to communicate yourself better also the knowledge of astronomy as well.

The Venus is the symbol of Love, beauty, relationship, and life in general. This is the planet most of the user wants to be as strong as possible. It also signifies a person’s ability to attract people and engage them better than others with weak Venus. You can know more about it in SUVICH : The real astrologyas it represents Girlfriend, Boyfriend, or spouse in a person’s life. It governs their married life and rules prosperity.

The planet Mars represents anger or temperament in vedic astrology. Mars is the rules of Ares and Scorpio and we all know how aggressive a scorpion could be also in many mythologies Ares is considered the God of War. Though it is certainly not a bad thing if Mars is affecting a person positively. People in Armies or Police etc. gain high recognition in their duties because of a strong Mars. It also helps you fight aggressively to protect your loved ones.

Jupiter is considered the preacher or mentor for all other planets. It is a planet that holds Knowledge and Intelligence. A strong Jupiter is always preferred because it can also reduce the ill effect from all the weak or wrongly positioned planets and cut down their ill effects. It is the ruler of Pieces and Sagittarius and to some extent affects Cancer and Capricorn.

Saturn is a highly revered planet in Hindu mythology and astrology. This planet represents Justice. Saturn is high in Libra and low in Ares and also the ruler of Aquarius. Saturn is also a slow-moving planet and that is why justice is sometimes get delayed. It is believed that Saturn decides and weighs your Good and Bad deeds and judge you accordingly. We also experience Shani Ki sadhe saati and Dhaiya because of these judgements only.

We have seen how important these planets are in our life. Along with these planets, we also have the 27 vedic nakshatras which contribute to our daily life and affect it. These Nakshatras are considered the creation of Prajapati Daksha who made the God Moon marry all 27 and give them their place as a cluster of stars that affect and contribute to the handling of the Earth.